From Stanford to London (sorta)!

The dreadful monotony of doing homework and staying home for the entire summer was finally interrupted with the onset of Tech Trek!
Tech Trek is a math and science camp for middle school girls aimed at encouraging girls to attend college and pursue careers in math/science related fields (because something should be done about the dismal numbers of women engineers in the field). The camp is a week long sleep-away on a college campus so that girls get a taste of the college experience. Unlike most other summer camps, girls get in on a scholarship. I had this honor myself in 2009 when I was the only girl selected from my school following an application and interview process. I had so much fun that year that I definitely wanted to come back to the program as a Junior Counselor (JC), one of the 4 high school girls that help out with the various classes and serve as role models for the girls.

Unfortunately I missed the deadline to apply for the position of JC by the time I emailed the coordinator who had sponsored my experience but I lucked out and they took me on board for two sessions of the camp by creating a new position..."Robotics Assistant!" And thus, I got to experience the whole week all over again, twice, at my dream college, Stanford University!

If I want to attend Stanford I'll have to polish my bike riding skills and get a lot smarter obviously
Robotics is just one of many classes/activities the girls cycle through while at Tech Trek (which include Biotech, Astronomy, Structural Engineering, Chemistry, field trips to places like the Virtual Human Interaction Lab and Stanford Linear Accelerator Center, a star party, and one of the best lectures ever given by Danielle Feinberg, of Pixar fame).

Unfortunately, many of these awesome things happened during the 4 hour block of time that is Robotics but I honestly didn't mind so much because I could spend that time being useful/helpful and earning this second gracious "scholarship." (They didn't make me pay for any of my boarding or meal charges this time either!) And I still had tons of fun either way.

The Robotics class consisted of having the girls build a robot using the LEGO Mindstorms kit and then programming it to do the various things listed below. Girls were split into teams of three and competed to have their robot accomplish the most tasks.

Neither building nor programming is an easy feat. While I never ended up building a full robot, the first day I arrived at camp, I was tasked with writing a program to include all of the above to show as an example to the girls. Writing that program took me all of the 4 hours of the class plus another half hour the next morning. It stung a bit whenever a team was able to accomplish the same feat in just 2 hours but that just shows the power of teamwork (and it didn't happen all too often. Making the robot wave it's arm and run a figure eight are the hardest tasks on the list.)

Girls building and programming at their stations.
Besides assisting with set-up and clean up, my duties involved answering questions and verifying/checking off groups whose robots completed the tasks successfully. By the second week I was even allowed to teach programming. ^w^

These girls are testing their robot in the hallway before asking me or the teacher to check them off.
Speaking of teacher, I got to work with one of the most amazing people I've ever met. Her name is Kea and this wasn't our first meeting...she was a junior counselor the year I went to camp! I thought she was really cool then but amazing only describes her now. She's studying to complete a degree in mechanical engineering, interns with big robotics company, and by the mere age of 19 she's done/experienced everything except for: competing in the Olympics, running for president of a country, and trusting her life to equipment (that means no skydiving or bungee jumping.) But other than those, she's done pretty much everything. I'm definitely expecting her to make a name for herself years from now...doing what, who knows!

Other highlights of the week included the Star Party where a local astronomy club comes out to Stanford and sets up their fancy telescopes, amazing us all with visions of nebulas and globular clusters...and having dinner with Danielle Feinberg, the aforementioned "Pixar lady." Since her talks always took place during Robotics, Kea and I made up that time by eating with her afterwards and let me tell you, she is another amazing woman. Not only did she graduate from Harvard and work for Pixar, but she was the Director of Lighting for films such as Brave and WALL-E. (of which I've seen neither, sadly.) She's also got one of those amazing stories of starting out as the only female in a tech industry dominated by men. I remember after listening to her, I was briefly inspired to become an animator.
I still remember clearly her talk from 2009 so getting to know about her away from Pixar was really neat. She's incredibly funny and adventurous too (she's taking 3 months off work since Brave took a toll on her and is using that time to travel all over). I didn't get a picture with her this time, but here's one from '09. 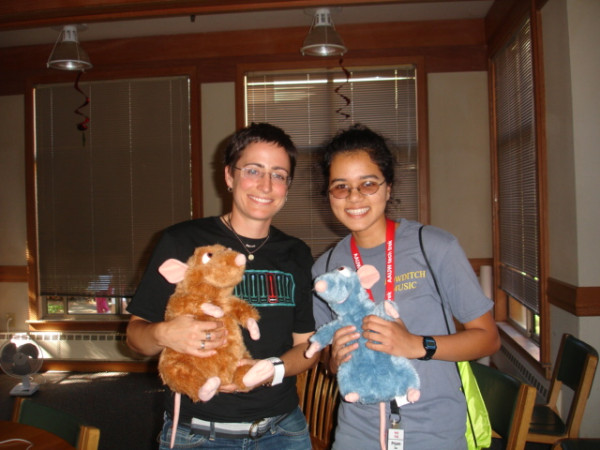 She's already famous; a quick Google search brings her right up
I guess what I really got out of Tech Trek this time was being able to meet so many great people and to have these chances I am always grateful.
The interruption of Tech Trek also interrupted my "hard-working" streak so after I got back all I did was sleep, laze around, and play Professor Layton! I finished the main storyline of Last Specter sometime towards the end of June and while it was enjoyable, it definitely didn't leap over Unwound Future to take the place as favorite game. I think I didn't find the storyline as compelling and Loosha just came out of nowhere for me. But I must confess, this game was hard!! When I finished the storyline, I didn't even have enough picarats to unlock any of the bonuses. I suspected as much judging by the rate that I lost picarats every time a puzzle came up. Is it just that my puzzle skills are deteriorating or are these some of the hardest puzzles yet? As the fourth game of the series, I'd like to think the latter explains it. Well, it motivates me to replay the game to get a better score.
Since then I've moved on to Little London...everything in it so adorable~ >w< It's currently exceeding my expectations with its variety of jobs, re"quests", and even its own mini plotline! I'd really like to try out the social club aspect of it so here's my friend code: 5157-9634-4086 Please let me know your friend codes as well!

Besides Little London, I'm paying close attention to the real London as the Olympics continue...but that warrants a post of its own so I'll stop here for now. after all I've sufficiently gotten into enough of a writing mood to make progress on my history essay