I had a dream where I ranked 13th on the admissions test for IIT (Indian Institute of Technology)....and then because even my dream self knew that was impossible, my brain changed it so that I ranked 13th out of international applicants, but 115th overall.

omfg who even am I to have dreams like this. If my own father ranked 70 out of the 2000 who are offered admission, I would probably rank 8374.
and in the end, I'm not even applying to IIT. brain wat r u doing

School starts tomorrow and so will the myriad of "How was your summer?" questions.
Since I'm terrible at ad-libbing, I prepare my answers beforehand.
Q: How was your summer?
A: It was really nice. I was able to really relax this summer. (<-- 100% truth.)
Q: Did you go anywhere?
A: No, I had relatives over instead, so the farthest place I went was San Francisco. (<---also truth)
Q: Did you do anything this summer?
A: Nope, not really. I did nothing. (<--not necessarily a lie)

But before I go around delivering the watered down version of the truth, I decided I should at least write down the full truth somewhere so that I don't start believing I really did nothing. To most people at school, I did nothing worth mentioning.
( Collapse )

Meet OG-9*, not only a consistent cross-court frisbee shooter, but also a winner of last weekend's Central Valley Regional. 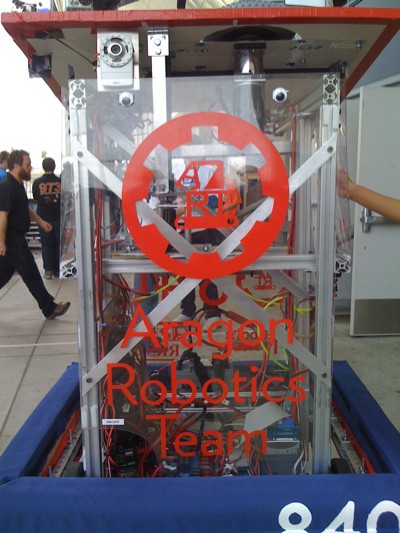 First regional win in the history of our team and I am so proud to have been a part of it, supplying fresh batteries all the way up to the finals. (Throughout the entire 3 days my electronics never had a single major issue...score!) All that build season angst and misery really paid off. (My grades still suck but I'm working on them.)

I'll put up a video of our robot in action soon...just waiting for a video of the final match to get uploaded.

*Star Wars reference because we arbitrarily decided our team would have a Star Wars theme this year.

OT: This weekend I had a concert with the school district honor band and my annual clarinet test. My embrouchure is in so much pain. ;_;

Posted via LiveJournal app for iPhone.

Lately I find I have more and more thoughts that I can't say to any of my friends.

Build season ended, but there isn't much respite.
In terms of good things, I got some motivation to work back. Perhaps seeing my grades helped kickstart that, but I was already starting to feel better when I saw this uploaded on YouTube.

This weekend, our FTC team (a smaller "appendage" of our robotics team you could say) is competing in the Northern California FTC Championships. While I'm not an active member of this team (I'm a "mentor" by title, but honestly, there's not much I can help with since the electrical portion is so simple), I went to meetings about once a month and attended one of their qualifiers, just giving support. I intended to do the same by attending the competition tomorrow too.

Then tonight I sent an email to the leader saying I wouldn't be able to make it, citing my studies as priority.
While this is not a lie, it's not the sole reason either.
I just imagined the day, spending 8-6 at competition doing essentially nothing (but perhaps scouting). Even though that's what I did at the last competition, and I found the matches exciting and fun...somehow, I'm not in the mood to do it tomorrow. I think this is where my conscience comes in to tell me I should spend that time studying.

I think I'm unnecessarily worrying while spiraling down the path of negative thoughts. The only things for certain are that my grades suck, I don't have the energy to attend competition tomorrow, and I don't want to see anyone from robotics tomorrow. I wrote this nonsensical post because I was scared by the feeling of not wanting to see them tomorrow when I normally love spending time with these people. I didn't want to admit that I could get tired of them. I still don't believe I am. I can't believe I'm still tired. I think I'm just tired of being tired.

I am currently a straight B student. I do believe this is the first time in my school career.

Well, robotics ended yesterday, so I have more time these days to pick up the slack. I know I can do it. I just need to pull up these grades before my parents catch wind of them and flip out...especially because I've been an academic disappointment lately.

hm, although 11 hour school days filled with robotics have ended, this is not a time for me to be taking it easy.

I think it's decided. I'll work until 3am and take a sick day, actually take some cold medication, actually sleep, actually become healthy, actually get work done, actually get my (academic) life back on track.
yes.

I thought I would considering that the JLPT gives a generous margin for error, but still, having it confirmed is a wonderful feeling. I can hardly contain my joy at knowing I passed. I think the real surprise comes from the fact that I got a perfect score on the listening section. I know that listening is my strongest point when it comes to Japanese, but I never had a real measure for it. I have definitely amazed myself.

Next time, I'll shoot for N3, and then I'll take on the AP Japanese test (which has a speaking portion ._.;;).

But right now, I am jubilant at having been certified with "the ability to understand basic Japanese."

...is working to build a robot to deal with that^.

We're halfway through build season...just 3 more weeks to go. Progress is slow, but I'm still optimistic that we can have a functional bot in time.

I've been absent way too much on lj for the past year so I'll use this meme to cover most of it. For 2013, I'll strive to write and update more!!

As always, thank you so much for reading my rambles and supporting me through the rough patches.
来年もよろしくお願いします。

I need to start transitioning back to posting here. I actually post a lot...on Google +. It never gets on here because I post mostly fleeting, silly thoughts...the stuff that should belong on twitter, not here. But today I decided that once in a while, I will post such silly thoughts as this journal is meant to reflect how I really am anyway.

"was watching moumoon's full moon live for this month
and they were about to play their new song which I've been obsessing over so I was really excited.
...and then Masaki, the guitarist, messed up so they had to start over.
Twice.
It was actually pretty hilarious. He kept saying "Wait, is it okay for pros to do this?" and playfully making excuses about guitar tuning. XDXD I learned that he's the kind to talk a lot to cover up embarrassment."

The song I'm referring to here is "Midori no Michi" and I really can't get enough of it. It's currently being used as a theme song for some promotional short movies for a fashion brand. It's released on 12/12 and since I was having trouble waiting, I was really excited when this appeared.


If you're interested in their live, the video will be up for about 7 days from now. Then you'll have to wait for next month.
I really love that they do these live broadcasts each and every month. Not only is it a treat to hear the acoustic versions of their songs, but the intermediary chit-chat and incidents such as the one mentioned above really allow the fans to see what sort of people they are. Because they're not super popular, they're rarely on tv shows and occasionally interviewed in print. Since my listening comprehension is loads better than my reading, I especially appreciate the fact that they do these live broadcasts AND record them for later viewing for up to seven days. (I stayed up till 2 once to watch them live...but soon crashed after.)

Just what am I talking about? Listen to moumoon's songs, watch them (recorded) live, and fall in love with them. That's all there is to it. :3

P.S. I'm kidding when I think everyone will love them. Their sound is definitely sugary sweet, so much so that it's probably unhealthy and would fall into the guilty pleasure category. とろけるチョコレートみたいな恋の味...